In total, since 2012, the balance between creations and strike-offs in Retail trade is 46 establishments. In fact, 575 Retail trade entities have come into existence in ten years while 529 have been written off. For all MES, the average number of entities created is 693 versus 387 strike-offs.

Map of the commercial density per 1.000 residents by district 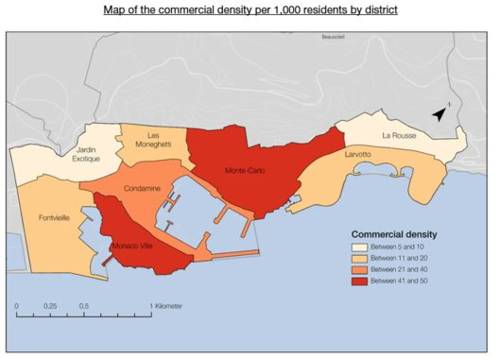 Breakdown of retail trade's revenues between NAF divisions 45 and 47 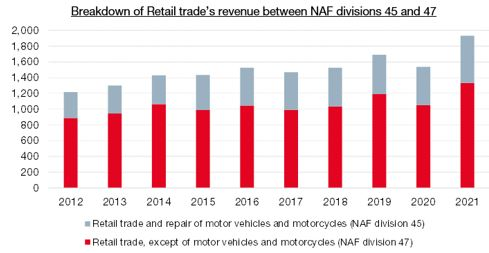 Over a decade, the weight of the Retail trade and repair of motor vehicles and motorcycles in the total revenue of the MES has risen from 27 % to 31 %.

Over the period 2012-2021, Retail trade, except of motor vehicles and motorcycles, accounts for the majority of the turnover of this MES.

Distribution of retail trade employees by nationality in 2021

More than 70.0 % of MES employees are of French nationality. There are 454 Italians, representing 15.3 % of all employees. 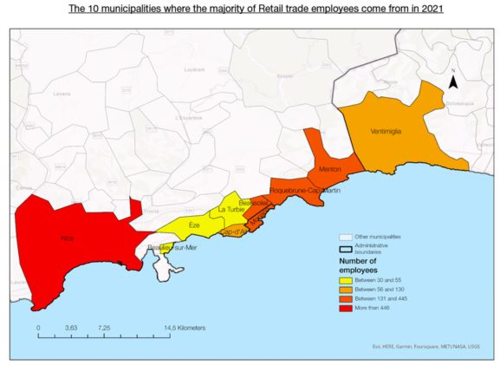 In 2021, 614 employees in the Retail trade sector come from Nice, that is to say 20.7 % of the total. The neighbouring municipalities of Beausoleil and Roquebrune-Cap-Martin have 333 and 283 employees respectively. Monaco is in fourth place with 302 employees, corresponding to 10.2 % of the total.

Among the most represented municipalities, there is an Italian municipality: Ventimiglia with 130 employees.

According to the retailers surveyed, in June 2022, the business climate deteriorates and expected prices reach their highest level in the retail trade and repair of vehicles.