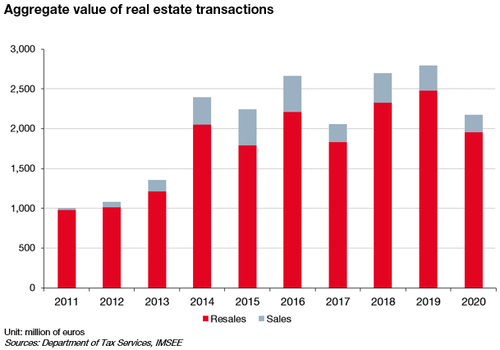 The cumulative value of transactions (new properties and resales) declined sharply (-22.3%) to a level similar to that seen in 2017. There was a much more notable decline in the number of transactions involving small apartments. In 2019, studios and one-bedroom apartments accounted for two thirds of transactions by volume, while in 2020 they represented only slightly more than a third. The value of sales also fell, though less sharply (-32%) than the number of sales (-52%) due to the types of properties sold: fewer studios and one-bedrooms, but more two-bedrooms. In years when it can be calculated, the price per square meter in Larvotto is also higher than that found in other districts.