The Demography Observatory is the result of a collaboration begun in 2012 between Monaco Statistics, the Registry Office (Nationality) and Monaco City Hall 's Informatics Department.

The aim is to present the main demographic indicators for the population of Monegasque nationality. 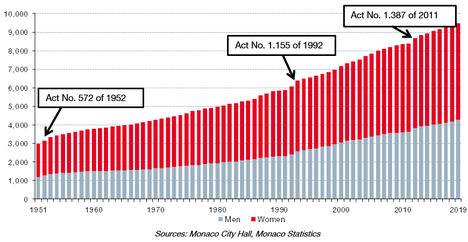 A total of 80 Monegasque nationals died, giving a death rate of 8.4 per thousand, close to the average observed over the decade between 2010 and 2019. Life expectancy at birth is increasing and stands at 86.5 years (84.4 years for men and 88.7 years for women). A total of 92 marriages involving at least one spouse of Monegasque nationality were celebrated. The nuptiality rate was 9.7 per thousand, in line with the average for the decade. The mean age of single people getting married continued to increase, reaching 33.2 years for men and 30.6 years for women.

The number of divorces that occurred in 2019 is not yet definitively known, given the inevitable delays associated with the legal procedures. There were 32 divorces in 2018, giving a gross divorce rate of 3.4 per thousand. This is the lowest rate for over 30 years.