Visit by H.E. Mr. Michel Roger of the new offices of Monaco Statistics 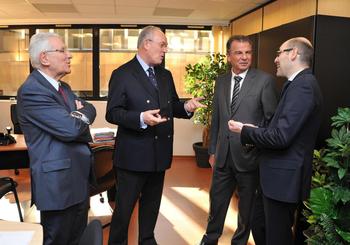 HE Mr. Michel Roger and Lionel Galfré discussing with André Garino, Chairman of the Economic and Social Council, and Michel Dotta, Chairman of the Chamber of Economic Development, both members of the Monaco Statistics Scientific Council Copyright Photo: © Charles Franch, Centre de Presse

Lionel Galfré, Director of IMSEE, which is celebrating its first year, gave an update on progress made in 2011 and presented the main projects for 2012.

He said that 2011 was spent primarily on the physical and administrative installation of the Institute (hiring staff, creating the budget...). The key themes dealt with by IMSEE in 2011 were: the development of an appropriate legal framework, the creation of a new NAF (as of 1stJanuary 2012) as well as the advance release of Monaco in figures and the GDP 2010. Monaco Statistics also ensured that the recommendations put forward by its Scientific Council, which met twice during the year, were fully implemented.

In 2012, Monaco Statistics will focus on finalising a legal framework adapted to statistics, on completing the data base census, on creating a special computerised data base, on developing statistics relating to demography, employment and housing and on improving quality in the production of statistics. The Institute will reinforce its work in cooperation with various bodies (National Council, Economic and Social Council, City Council...).

The barometer relating to the economic survey of April 2021 in the Retail trade is online.According to the retailers surveyed, in April 2021,the bu... Read more[+]