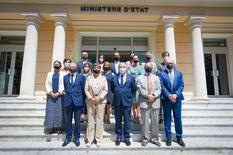 Monaco Statistics met on Friday for the 13th Scientific Council for Statistics and Economic Studies.

During the event, chaired by Mr Pierre-André Chiappori, Monaco Statistics Director Sophie Vincent presented the studies conducted during the course of the year.

There was a particular focus on the various analyses published by Monaco Statistics this year, notably on the health aspects of the pandemic and its social and economic repercussions. By way of illustration, the May data from the COVID-19 Impacts Observatory was presented and commented on.

Monaco in Figures 2020, which was released on 25 June, was also presented to the members of the Scientific Council, who were impressed with the quality of the publication as well as this year’s addition of a special chapter focusing on COVID-19.

The other main issues addressed since the last meeting of the Scientific Council were: monitoring of indicators to track violence against women, published in a second report on this topic in January this year, in partnership with and supported by the Women’s Rights Committee; the continuation of work to measure the gender pay gap; and the planned publication in September of a European summary of the results of a survey on the consumption of psychoactive substances by 16 year olds, which will enable an assessment of the situation in the Principality compared with the 30 other participating countries.

At the end of the event, H.E. the Minister of State joined the meeting for a demonstration of a tool specially developed for the tenth anniversary of Monaco Statistics. To mark the occasion and as part of its goal of making public statistics available to all, Monaco Statistics wanted to establish a simple, fun interface that would enable anyone to access 10 years of statistics on the Principality’s key economic, social and demographic indicators. In just a few clicks, members of the public can view trends in the country’s revenue, employment and GDP over the last decade, break the data down by economic sector, look at the place of birth and residence of nationals, or see how the modes of transport used by the Principality’s residents have changed over time. There is no doubt that this new method of presenting data, which was developed in partnership with Monegasque start-up Thoody Consulting and is available from the www.imsee.mc website, will be useful to anyone who wants to know more about the Principality’s key indicators.

At the end of the presentation, H.E. the Minister of State congratulated Monaco Statistics on its achievements and reiterated the importance of both the work that has been done this year to measure the impact of the crisis and, more broadly, of public statistics for policy-making.

All Monaco Statistics publications are available on the www.imsee.mc website and can be downloaded free of charge.