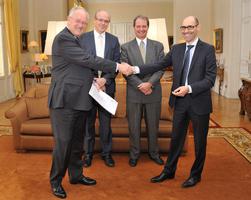 Following the undertaking by the Prince’s Government during the budget debates relating to the 2012 Preliminary Budget, Monaco Statistics yesterday submitted its report on state-owned housing to HE Michel Roger and presented it to elected members of the Upper House.

The Government had in fact proposed to the National Council, which had accepted, to give an assignment to IMSEE to conduct a study on the state of housing in Monaco and assess needs over next 10 years.

This study, conducted by a body whose independent Scientific Council is under the chairmanship of Pierre-André Chiappori, presents objective mathematical and statistical information as well as data which were until now unknown (the age pyramid in 10 years for instance) which throws new light on an issue which is a national priority for the Government and for the National Council.

Findings of the study

This prospective study of housing needs in Monaco up to 2022 shows that the significant investment made since several years and investment to come through deliveries scheduled up to 2017 will lead to a gradual but definite improvement in the situation, from one characterised by significant unmet demand to one where there will be room for manoeuvre for a dynamic and qualitative management of the stock of state-owned housing.

Another finding of the Monaco Statistics report shows that the impact on housing of the increase in the Monegasque population, following the reform of the Law of December 2011 on nationality and future acquisitions of nationality through marriage, will be very marginal, since almost all these new Monegasque citizens already live in the Principality as they have been married to a Monegasque citizen for over 10 years.

The study confirms the merits of the initiatives undertaken since many years in respect of the construction of state-owned housing and recommends the implementation of a policy which shifts the focus from an essentially quantitative approach to a more qualitative approach to housing in Monaco.

Following the submission of this report and the main findings of Monaco Statistics, the Government’s objective over the coming months is to study several avenues of reflection in consultation with the National Council for the optimum management of the stock of state-owned housing. In particular these could concern:

- The renovation of some state-owned buildings, to be conducted in phases

- The introduction of measures to revitalise the management of the stock and promote mobility in order to increase the satisfaction of Monegasque families and allow a more rational occupation, through better alignment between the number of rooms in flats and the normal need of households.

Lastly, it is worth noting that the Government does not intend to stop the construction of state-owned housing but rather to continue constructing at a pace which is in line with needs.

This study provides an objective basis for discussion on an important issue in the Principality: housing for Monegasque citizens and the means to improve it. 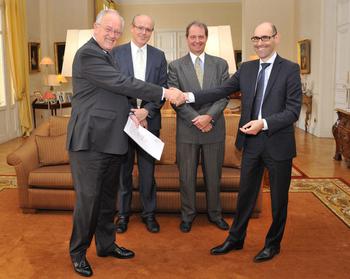 Photo caption: from Left to right :

The barometer relating to the economic survey of September 2020 in the Retail trade is online.According to the retailers surveyed, in September 202... Read more[+]